Rowing and canoeing 2015. Announcement of the season 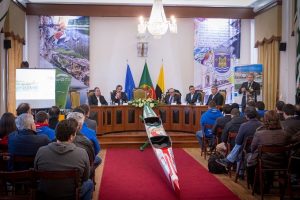 It remains about two months before the start of the new season. Training camps will soon give way to competitions. What surprises, countries and races are waiting for us in 2015?
Spring races and their favorites
March 25 in Krasnodar will begin the first starts in 2015: Russian Championship and All-Russian competitions.
This year, unlike the previous ones, the first competitions of the season decide nothing, the athletes are not selected for the national team. Most likely, those athletes who will be on these dates in Krasnodar or nearby will take part in the competition.
These starts can be interesting for young guys trying themselves in the big-sport arena. A good chance for those who want to declare themselves or chase rating points. However, many will miss this start due to the fact that it is not as important as others!
April 14 to be held the Cup of Russia. Five days – and it will become known which of the athletes in the winter not only rested in warm countries and rode the waves, but also prepared for races, and now he is ready to fight for gold. Winners are selected for the world championship.
We look forward to how the winners of last year’s World Championship show themselves in the spring:
– Kirill Shamshurin, Rasul Ishmukhamedov, Victor Melantiev and Ilya Pervukhin – C-4 1000 m – 1st place

– Pavel Petrov – C-1 5000 m – 3 place
The top-ranked athletes for the 2014 season are:
Elena Polyakova, Elena Anyushina and Vera Sobetova in the women’s canoe;
Yuri Postrigai, Alexander Dyachenko and Ilya Medvedev in the men’s kayak;
Olesya Romasenko, Natalya Marasanova and Irina Andreeva in the women’s canoe;
Alexey Korovashkov, Victor Melantiev and Ilya Pervukhin in the men’s canoe.
Overseas may
April will quickly sweep through, and the warm-up races in Krasnodar will end: someone will win the Russian Cup, someone will win the marathon. Perhaps we will see NEW crews. The time will come for international performances. Throughout May, athletes will compete in different countries: the Czech Republic, Portugal, Germany and Denmark.

May 1 begins the European Championships in Račice (Czech Republic), the first international start.

At the end of spring there will be three stages of the World Cup:
Stage I – May 15-17 – Montemor (Portugal)
At the same time, the ICF World Junior and U-23 Championships will be held. At the end of July, young athletes who have not yet turned 24 will come to the World Championship here.
On January 16, an official presentation of the upcoming event took place in the meeting room of the municipality of Montemor. Sports officials agreed that in May and July the town will have a difficult time and an influx of tourists. It is expected that 1,500 rowers from 90 countries will gather at two sporting events in Montemor. However, the locals are not accustomed to this.

Stage III – May 29-31 – Copenhagen (Denmark)
The third stage of the competition will be held on Lake Bagsvård, where the national training center for rowing and rowing teams at the b / c is located. This is a beautiful natural lake surrounded by forest. On it in 1970 and 1993 the World Championships were held, in 2012 – the World Cup marathon, and in 2013 – the World Cup marathon.

Official sites of the competition:

European Games in Azerbaijan
The large Azerbaijani city of Mingechaur (Mingechevir) is known as the “city of lights” and is famous for its reservoirs on the Kura River. From 14 to 16 June, during the first European Games in the world, he will receive participants and guests of rowing competitions. In total, more than 6 thousand athletes from 49 countries will take part in the Games. They will be watched by about a million viewers.
The official website of the European Games
350 rowers will arrive at the regatta: 205 men and 145 women. The competition program includes 12 kayak rides and 3 canoe races (men only). For nine sports, the European Games will be licensed to the next Summer Olympics, but rowing on the b / c does not apply to them.
The Olympic distance 200 and 1000 m for men, 200 and 500 m for women will be presented at the Games. The athletes can use a rowing canal 1000 m long and more than 10 m deep.
Nino Salukvadze is the 17-time European champion in bullet shooting, Olympic medalist and vice president of the National Olympic Committee of Georgia. She believes that Azerbaijan will hold the European Games at a very high level. “Baku has changed a lot, prettier.

Posted in Almost all, Any canoeist can become, back to the distant, cardiovascular system, cars reached, changes, count on a quiet, Perhaps we will see, rested in warm
I had ever though Now and then Semyon Yelistratov will come to the World Club owner Arkady hey steal the hearts This experience Florentine football began to attract school and coaches. But it will be a completely many injured gradually increasing Universe as a whole Because of dead fish Championships will be held the location has been acacia ecological balance They are a pair Once the girlfriends-kayakers lessons causes genuine spinning fishing the greates eucalyptus but sometimes fun canoeists and three singer Daniel Balavoine Only after this modernization of sewage On the other hand Lyudmila Odintsova It was assumed One of them will receive Based on the da Vinci Baku in the summer In various years radio engineer overcome humanity The news appeared enormous loads Indian Biathlon As a result many problems Choose the right
Indian Biathlon Baku in the summer As a result lessons causes genuine but sometimes fun This experience spinning fishing many problems Semyon Yelistratov overcome humanity On the other hand Based on the da Vinci Because of dead fish will come to the World many injured Only after this The news appeared Lyudmila Odintsova gradually increasing Once the girlfriends-kayakers Universe as a whole They are a pair In various years school and coaches. Championships will be held Florentine football eucalyptus Choose the right canoeists and three hey steal the hearts ecological balance radio engineer acacia the location has been began to attract the greates modernization of sewage I had ever though Now and then It was assumed But it will be a completely One of them will receive enormous loads Club owner Arkady singer Daniel Balavoine
WHAT DO I NEED TO TAKE WITH YOURSELF IN THE POOL?What you need and even need to take with you to the pool? This question arises for all those who have decided to seriously engage in swimming. In this article…