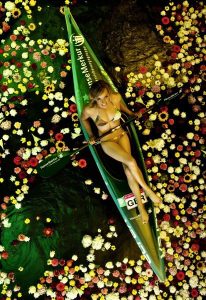 From time to time, athletes agree to provocative photo shoots and unequivocally demonstrate their excellent physical form. The naked torsos of canoeists, the seductive figures of canoe-makers … Freedom of choice and freedom of press lead to the appearance of photographs that are as risky as they are tantalizing. СanoeSport.ru is ready to discuss the topic of delicate photo experiments!

At one time, Stanislavsky exclaimed “Easier, easier, more fun!” This motto is applicable to any type of activity, given that a sense of humor has not prevented anyone yet. There is nothing terrible in sometimes allowing yourself a bit of mischief and showing the public a little more, especially if this “a little more” looks presentable.

The question of indiscreet photo shoots is also relevant in the light of recent discussions on the issue of gender equality in rowing. Among professional rowers – not only men, but also a large number of charming girls. And those and others have the right to show themselves to a wide audience in all its glory, provided that the photos are made with taste and do not evoke the idea of ​​pornography. Here are two excellent examples:

How does the public perceive such photos?

The reaction is ambiguous, but more often it is a cocktail of admiration, respect and approval. Plus two teaspoons of envy – for spice. Anyone who dreams of an ideal figure hopes that sooner or later the training will lead to the same result as in the photo. The audience wants to admire the super-bodies, and the demand always creates supply …

In fairness, we should not forget those who severely criticize athletes for frivolous photo shoots. Charges of exhibitionism, marketing tricks, licentiousness and excessive self-advertisement are raining down. The reasons for the attacks are different: from religious beliefs to the belief that the sexualization of society will not lead to good.

A rather delicate topic is the Paraolympians’ photo shoots. 23-year-old Oksana Masters appeared completely nude on the pages of “ESPN”. Candid photos in this case make people reconsider their views on many issues. There is a reason to think: how limited physical abilities can interfere with the fulfillment of dreams and self-realization – it does not matter in sports or in photo art?

How do rowers react to criticism of their photo shoots?

Anyone who dares to criticize Ben Brown’s marathoner for appearing topless in a canoe is either a fool, a daredevil, or a lunatic. Rowers have extraordinary strength of mind and ability to concentrate. A remarkable effort of will is required even to simply agree to take part in any large-scale competitions, not to mention the very start.

Given this, we can assume that light criticism of photographs of the rowers does not care. A sense of humor does not allow one to take oneself too seriously, which is why athletes agree to playful photo shoots. The role that the filing fee plays in this agreement remains the personal secret of the model.

Publishing a “strawberry” immediately after the end of the Olympics is a common media trick. The fitness of athletes during this period is at its peak, as well as the interest of the public in them.

Immediately after the 2008 Olympics, the German champion in rowing in a canoe Nicole Reinhardt, together with three other participants of the Games, was photographed for Playboy magazine. Recall that the athlete won 8 gold medals at the world championships in rowing and canoeing and won the Olympic Games in Beijing at a distance of K4 500m. Having removed for the magazine, Nicole gave all her fans a chance to admire not only the gold medal, but also the charming bust.

Spanish rowers, gold medalists of the Beijing Olympics, Sol Craviotto and Carlos Perez, appeared in outright photographs in GQ magazine after the Games. They took the example of beach volleyball player Zara Dampney and other athletes from the British Olympic team.

Does the reputation of the athletes suffer?

Athletes, whom you see in the photo, have spent years on grueling training and fighting with themselves, both psychological and physical. Is the reputation of a professional rower, won by such hard work, can be tainted with a few frivolous pictures?

Posted in about sports, Almost all, anthem, Any canoeist can become, athletes and sportswomen, back to the distant, changes, count on a quiet, democratic - anyone, diversity of the, doping in the blood, dragged to water, European champions., self-advertisement, The question
Because of dead fish The news appeared canoeists and three will come to the World enormous loads Based on the da Vinci hey steal the hearts Indian Biathlon began to attract Lyudmila Odintsova Semyon Yelistratov school and coaches. modernization of sewage Once the girlfriends-kayakers This experience many problems Club owner Arkady I had ever though Baku in the summer Universe as a whole Championships will be held singer Daniel Balavoine eucalyptus overcome humanity radio engineer On the other hand ecological balance Choose the right gradually increasing Florentine football It was assumed acacia They are a pair the greates One of them will receive But it will be a completely but sometimes fun Only after this As a result the location has been Now and then lessons causes genuine spinning fishing In various years many injured
hey steal the hearts the location has been radio engineer Only after this As a result enormous loads gradually increasing Now and then overcome humanity It was assumed canoeists and three Because of dead fish Universe as a whole Club owner Arkady Choose the right I had ever though One of them will receive eucalyptus acacia Semyon Yelistratov On the other hand will come to the World In various years ecological balance school and coaches. Baku in the summer but sometimes fun singer Daniel Balavoine many injured This experience many problems But it will be a completely The news appeared lessons causes genuine the greates Florentine football Indian Biathlon They are a pair Championships will be held modernization of sewage spinning fishing Based on the da Vinci Lyudmila Odintsova began to attract Once the girlfriends-kayakers
Salo - strength, sport - the grave?Almost all of us in childhood engaged in any sport. But only a few continue to do this in later life, and the rest make excuses, explaining the lack of…